If you have heard of just one casino streamer out there, our bet is that Roshtein is it. This guy is by far the most popular online casino streamer, and he just happens to be a huge Stake fan. That means, like us, he spends a lot of time playing Stake casino games.

The bonus is, that he is a high roller, giving us a glimpse of a level of gambling not all of us can afford. And he happens to be super entertaining. After all, he may be a gambler, but he didn’t get so popular by chance.

Some facts about Roshtein

So who is Roshtein really? That is the million-dollar question. And despite being world famous through his social media profiles, amazingly, no one really knows. Like even the simple basic things.

Well actually, we know two things. His real name is Ishmael Swartz and he’s from Sweden. Beyond that, your guess is as good as ours as to how old he is (we’re thinking late 20s maybe early 30s from the looks) or if he’s married or not.

His moniker we’re also guessing was inspired by the notorious American gambler from the 1800s.

Whatever his background or true identity, the reality is that Roshtein is well loved. There’s something about his look and style in his signature long hair and hat combined with extreme enthusiasm and laughter that really works with the audience.

©instagram.com/roshtein | On Instagram Roshtein shows his private side. You can see him with friends and doing a lot of fun stuff.

Do it like Roshtein and play at Stake Casino

Roshtein has been streaming on Twitch since 2016. With over 900K followers (and growing), he is one of the biggest casino streamers on the platform, and one of the most popular streamers period. He is that good at what he does. And what he does is give super animated narration as he plays, mostly slots, and often at our favorite casino Stake.

In the words of his own Twitch ‘About’ description, watching Roshtein is best described as “a journey where you will witness extraordinary combats, great choreography & brutal laugh”. And we agree! Not only is he super personable by the way, he’s also really engaging, jumping in on chat sessions, and answering feedback all the time as well.

On August 17, 2021, Twitch banned Roshtein. The reasons are still unclear, but his fans speculate that it has to do with violating Twitch’s Terms of Use. Just about a week earlier, Twitch had updated its terms, banning links and referrals for online gambling. One person noted that Roshtein still had a casino logo in his graphics. In any case, it seems things have resolved themselves within a day, and Roshtein is back on the platform! 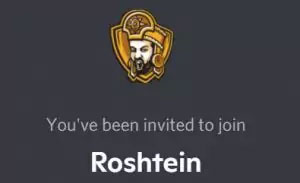 Discord is also a popular hangout for Roshtein and his fans. The party is always on in Roshtein’s server, which has nearly 100,000 members.

As with other spaces on Discord, you will need to access it with a personal invitation link as these are essentially private spaces. Since no one wants minors gambling, the Roshtein Discord server is set for 18+ only.

Discord is a platform where users can create their own servers, or chatrooms, that works on both desktop and mobile. It’s free to use although extra features can be bought. While Twitch also has a chat function, streamers like Roshtein have been moving their home over to Discord after Twitch began banning casino advertising on its platform in August 2021. This was a huge issue for casino streamers as they see a fair bit of revenue from casino advertising.

You can still see Roshtein Twitch videos on Discord, and of course all the crypto casino links and promos as well. And the streamer knows how to keep things flowing on this channel too, with frequent giveaways and lucky draws. 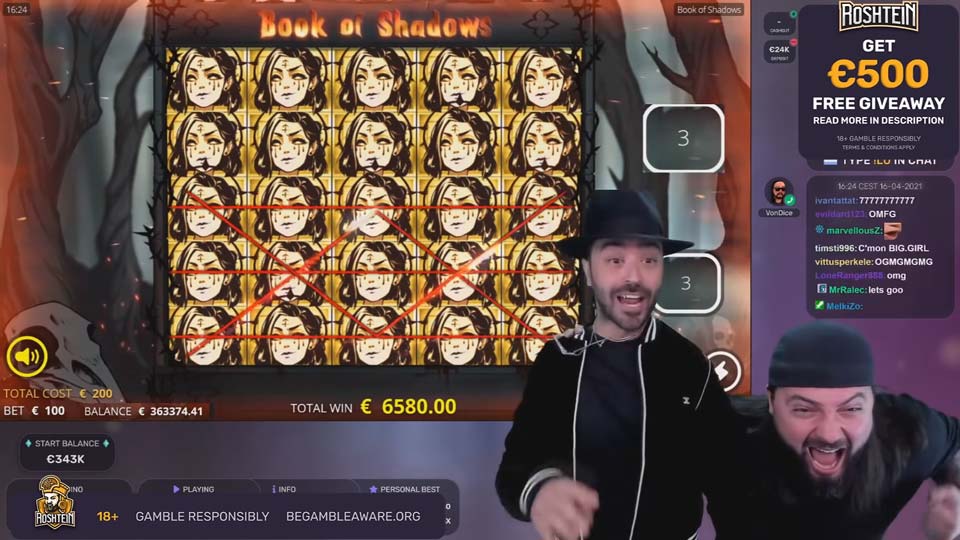 ©twitch.tv/roshtein | Roshtein is one of the biggest high rollers. He bets hundreds of Euros or Dollars and he also wins really big.

Sometimes he makes smaller bets, but what Roshtein is better known for, and what his followers really love, is his appetite for high stakes wagers.

That means on the lower end 100 euros a pop (which is pretty big in our books!) and up to 1,000s of euros at a time. Big stakes mean bigger wins. And frankly, we have to admit, more excitement. Just by watching you get a feel of what it’s like to be a whale. But the risk is on him.

Like most casino streamers, Roshtein mostly plays slots – albeit for higher stakes than competitors. Some of his favorites are the high volatility slots like the Book of Dead and Deadwood games.

We love watching him play Stake slots too. But every now and again, like us, he’ll give us a taste of a different game, which is a nice way to spice up the entertainment. These games are generally table games like a few rounds of roulette.

Truly dedicated to his form, Roshtein often streams for hours at a time. And he starts playing even before he goes live. This is a great strategy and part of what makes him so great.

Basically, so you don’t get bored, he’ll often dedicate hours spinning the Stake crypto slots, stopping in time to go live and share the most exciting bonus rounds he’s reached with you. This way you get a glimpse of the hottest action without having to wait around.

Roshtein playing some of his favorite games at Stake.com 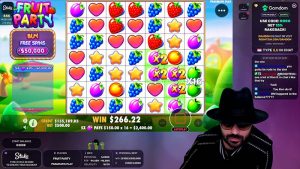 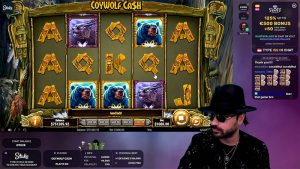 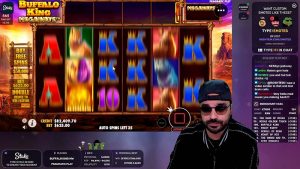 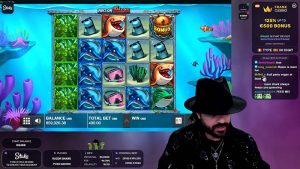 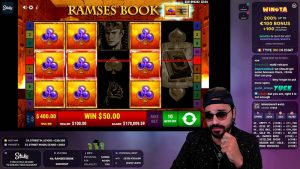 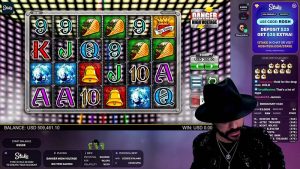 Gamble with Bitcoin at Stake Casino

As the most successful slots streamer, Roshtein knows what keeps his audience engaged. And this means choosing the most highly regarded crypto casinos around. You chose Stake for a reason. And so did he. He clearly understands that what Stake has to offer is a step above the rest. And so over time he’s become a total Stake fan.

In addition to watching him play your favorite Stake games, Roshtein also brings you special Stake promos, which further solidifies our love for him. Keep an eye on his streams for his latest Stake promo code, with bonuses like deposit $25 and get an extra $35 free.

©twitch.tv/roshtein | Roshtein shows during his streams that he plays at Stake Casino. He also shows that you can win really big at this crypto casino. And this big win of 16.65 million Dollar is not his highest payout. His record win in the same online slot is 17.55 million Dollar.

Although Roshtein has never publicized his net worth, it’s estimated to be in the $25 million to $30 million range, which is pretty darned rich we’d say. His biggest single win yet of $17,550,000 on Wanted – Dead or A Wild definitely contributed a good chunk to that. And that we’ll just point out was ultimately on a $1,500 bet (i.e. an excellent return).

Other notable wins along the way include some pretty noteworthy sums in the tens of thousands and even hundreds of thousands too. Again, he’s betting big, so he’s often winning big when he gets lucky.

That being said, since he’s betting with so much money, it’s a lot of smaller wins as well as streaming royalties that play a big part in building his wealth too.

When to watch Roshtein play

It’s always fun to watch Roshtein play. Although you can be spontaneous and have a flip through his Twitch to see if you can catch him live at any given time, even better is to have a look at his schedule in advance. You can see it regularly updated on his Twitch profile, so you don’t accidently miss a hot session planned.

©twitch.tv/roshtein | As soon as Roshtein starts streaming in the evening, he is playing for hours.

If you can’t make a session, no worries. He’s usually on live a few times a week, and generally his sessions begin in the late afternoon, with peak action taking place around 8 pm, i.e. prime time. Sessions are often about 7 hours, though if there’s an exciting tournament taking place, he’s known to go 12 hours straight, or more if need be!

What to watch Roshtein play

Like we said, Roshtein mostly plays slots. But not necessarily randomly. He’s got a couple of programs on Twitch you can follow, the most popular being Bonus Hunt.

This is where he spends all of his saved up features and free spins that he has collected in advance, playing slots throughout the day. That way he is able to start with the hottest action of the most amazing bonus rounds, so you get treated to the best parts of the games instantly, with the potential for the biggest wins. A total adrenaline drive really.

For a fun twist, he also by the way sometimes streams a show called RoshFails presenting his biggest losses of all things. Now we certainly don’t applaud laughing in the face of a loss, but it is undoubtedly fascinating to watch. And yes, since he’s so reactive, you might end up laughing too, which we’ll excuse since that’s the point.

All of the proof points to the fact that Roshtein is legit – playing games with his own cash and definitely not in practice mode. He’s just a regular guy with a bigger appetite for risk and fame than most, and he’s simply awesome at fulfilling the niche he’s created for himself.

While Roshtein made his name for himself on Twitch, where he has his biggest following by far, he is also very active on other social media platforms. For example, on Twitter Roshtein has nearly 80K followers (and growing). You can follow him there if you’re interested in Roshtein tweets sharing highlights of his big wins, scheduled programs, and special promotions.

You can also follow Roshtein on Instagram, joining his over 112K followers there. Or if you want quick access to his clips, Roshtein has an active YouTube channel with about 76.5K people currently following him. Although less popular amongst most players, we’ll just point out that he also has an active Discord account and a far less active Facebook profile.

Although every casino streamer brings something different to the table, Roshtein is recognized internationally as one of the best, if not the best. And since he’s so devoted to Stake gambling, that makes him all the better to us.

If you haven’t watched casino streaming before, it is more amazing than you might think. And if you’re a regular watcher, well if you’ve yet to check out Roshtein (which we find hard to believe is possible), do so now. Even if you don’t quite connect to his style, there is absolutely no doubt this guy is entertaining.